What really is 'Performance Hydration'?

Water can also enter the body in the small intestine as a result of the absorption of carbohydrate and sodium, through the process of cotransport. Carbohydrates, such as glucose, are absorbed into the body via a specific transporter called sodium-glucose contransporter 1, or SGLUT1 for short. These transporters act as a conveyor belt for glucose and sodium, moving them across the small intestine without the need for an osmotic gradient. As carbohydrate and sodium is moved through the SGLUT1 transporter, it also drags with it large volumes of fluid, significantly assisting in hydration. For every single glucose and sodium molecule that is moved by SGLUT1, 260 water molecules are moved with it (Loo, Zeuthen, Chandy, & Wright, 1996: Reference 5). The animation below demonstrates the facilitated transport process working in conjunction with passive transport:

A hypotonic solution represents the fastest possible way to hydrate: In situations where perspiration rates are extremely high over short periods of exercise (up to 60 minutes), including indoor turbo/gym interval sessions, spinning classes and short competitions in extreme heat, hydrating with TORQ Hypotonic will deliver superior performance over any other fuelling/hydration strategy.

A hypotonic solution offers significant benefits over electrolyte tablets: We have been particularly vocal on this website about the mis-selling of electrolyte tablets for a variety of reasons. In summary, we are concerned about the fact that these tablets don’t do what the user might perceive they’re going to do. They contain ZERO carbohydrate, so can only provide a passive transport mechanism for hydration. As demonstrated above, carbohydrate is required to engage facilitated transport.

The fact that the electrolyte tablets contain no carbohydrates, means that they need to be artificially sweetened, which we at TORQ are heavily opposed to. They also contain effervescent agents, which aren’t required if the drink is supplied as a powder rather than a tablet. Many drinks, including these tablets, also contain colors, which we also refuse to entertain at TORQ.

Our main complaint about the marketing of electrolyte tablets was and still is that zero carbohydrate means zero fueling benefit and this isn’t being made clear to customers in our opinion. TORQ Hypotonic contains 15g of multiple-transportable carbohydrates (60 Kcals) per serve. We make it abundantly clear that this isn’t enough to optimally fuel for longer performances (one would need to drink 3 liters of it to fuel optimally) – it is however a lot better than zero carbohydrate.

In summary, electrolyte tablets won’t hydrate you very well, or fuel you at all and contain sweeteners, so what do they actually do? If hydration is your overriding goal, use TORQ Hydration, because it works. If you are exercising for longer than an hour, or have a heavy training schedule, consult the TORQ Fueling System and choose products that are appropriate for your objectives. You can always drop us a line, or pick up the phone and talk to us if you’re confused, it’s all part of the service we offer. 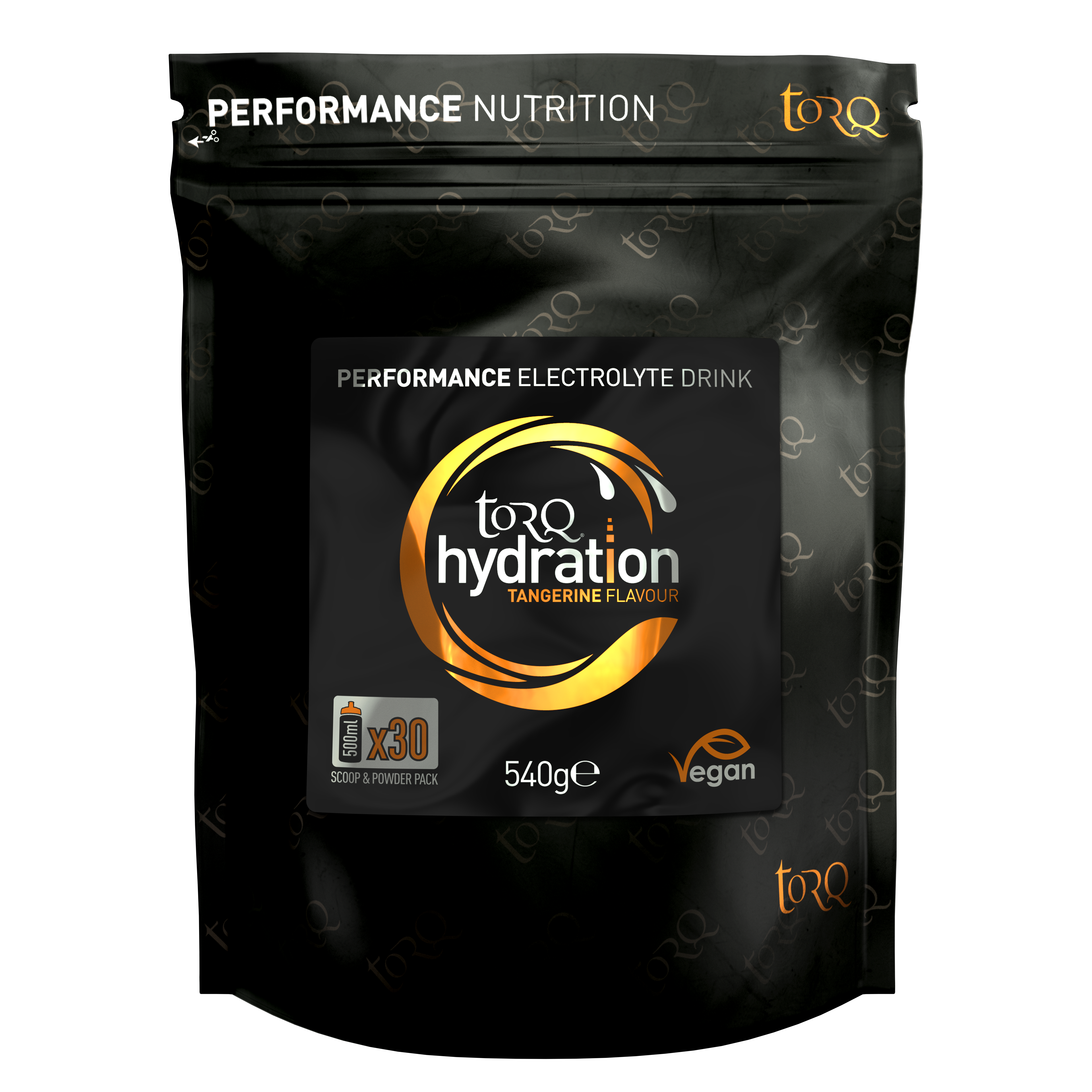 In case you were wondering, pure water is a particularly poor hydrator. Plain water causes bloating due to poor absorption and also suppresses the thirst reflex, leading to decreased desire to drink. It also stimulates urine output and is therefore, inefficiently retained within the body. The carbohydrate and electrolytes in TORQ Hydration overcome all of these problems.

TORQ Energy utilizes a 2:1 blend of glucose-derivatives and fructose founded on a now substantial body of peer-reviewed published research (see bottom of this page for details). The carbohydrate sources for TORQ Hypotonic come from dextrose (2 glucose molecules bonded together) and fructose. This dual-delivery carbohydrate formulation has been proven beyond doubt to supply energy faster than any other combination of carbohydrates or single carbohydrate source formulations. Take a look at the two very short movie clips below, which demonstrate how 2:1 Glucose-Derivatives:Fructose deliver over 40% more carbohydrate to the blood per hour than single glucose sources (the next best option). 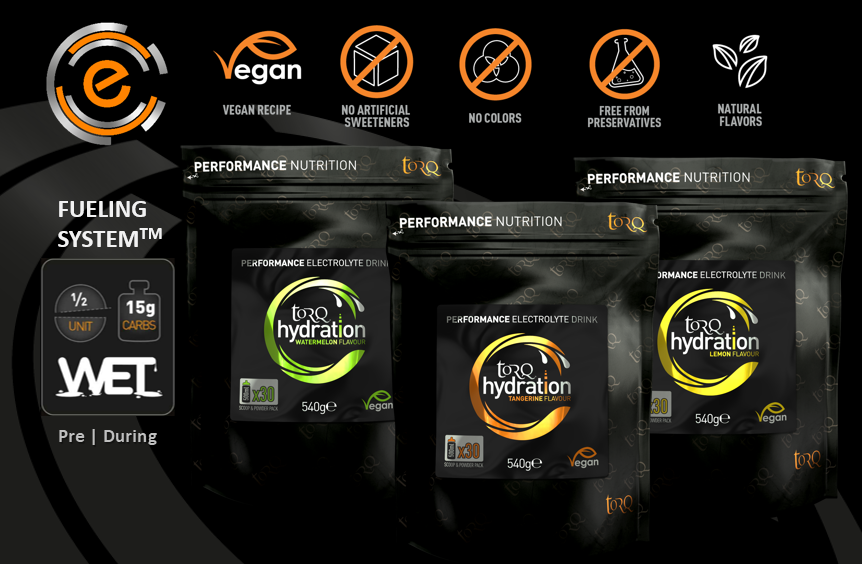 Please Note: TORQ Hydration is the new name for TORQ Hypotonic. The name and branding has changed, but the product is exactly the same.

TORQ Hydration is an advanced hypotonic formulation specifically aimed at optimizing hydration where events/sessions are no more than an hour long, and heavy sweat loss is anticipated. TORQ Hydration can also be used as part of the TORQ Fueling System during longer events, or used as an excellent pre-exercise drink for anticipated heavy perspiration sessions.

Each TORQ Hydration serving contains only 15grams (0.5 TORQ Units) of carbohydrate, so is very light on calories (60 kCals per 500ml), which means that achieving optimal fueling for longer durations using this product alone is literally impossible as it would require consuming 2-3 litres of fluid! It is therefore essential that you read and understand the TORQ Fueling System and consume enough of TORQ’s solid fueling units – TORQ Gel, TORQ Bar and TORQ Chew – if you are going to use TORQ Hydration as a means of delivering fluid during extensive endurance sessions.

Our advice for longer efforts, where fueling is required as well as hydration, is to use TORQ Energy as your drink source, because the isotonic nature of this product will provide a better balance between fueling and hydration – that said, the choice is clearly yours, as long as you understand that your goal in the endurance scenario is to consume 2-3 TORQ Units per hour. Some people will prefer the lighter flavor and mouthfeel of TORQ Hydration, and that’s fine as long as you understand the Fueling System rules! Ultimately, using TORQ Hydration as your fluid delivery source during longer efforts will require a greater consumption of the concentrated TORQ fueling units.