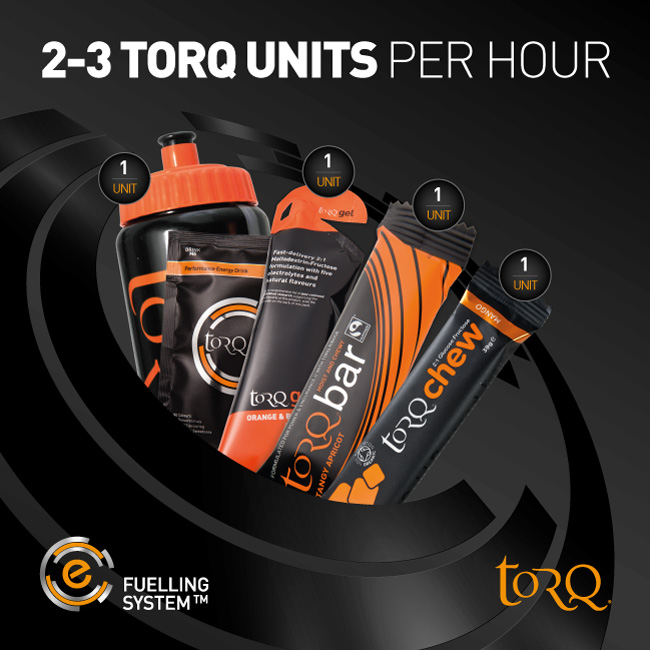 Our guidelines are simple. Take 2-3 TORQ units per hour. 1 TORQ unit equals 30g of multiple-transportable carbohydrate and we have made consuming your TORQ units extremely easy by creating uniformity across the fueling portfolio. 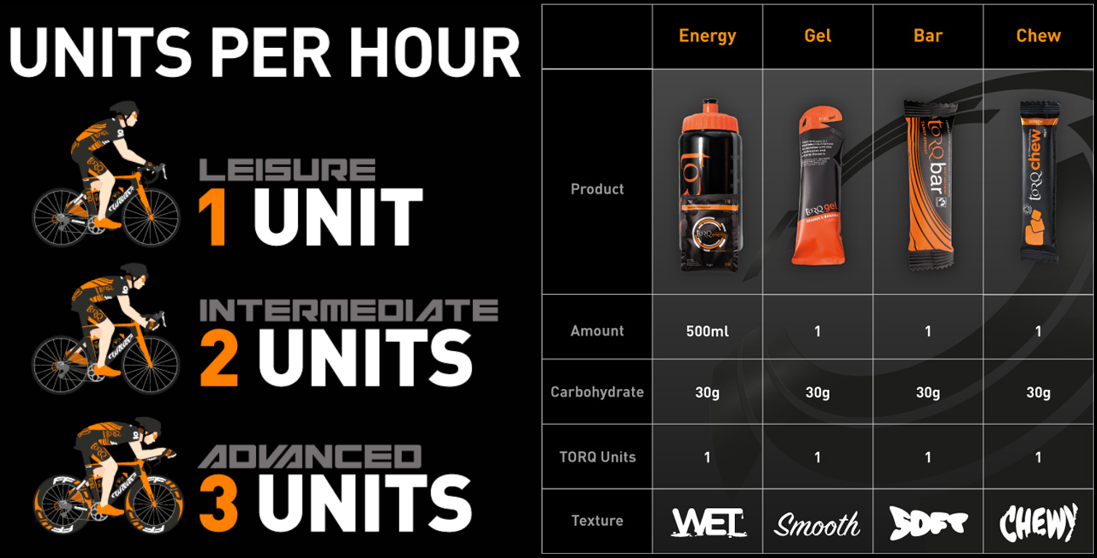 If the weather is hot, it makes sense to consume more 500ml (~16oz) energy drink units, because you’ll be getting fluid and electrolytes with your carbohydrate to facilitate hydration. 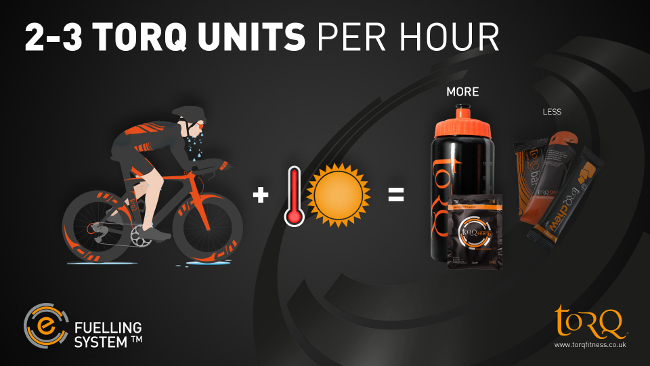 In cooler weather, over consumption of TORQ energy will fill your bladder and your exercise will be interrupted by bathroom breaks! This is where drinking less, but gaining TORQ units through the more concentrated TORQ fuel sources (bars, chews, and gels) makes more sense. 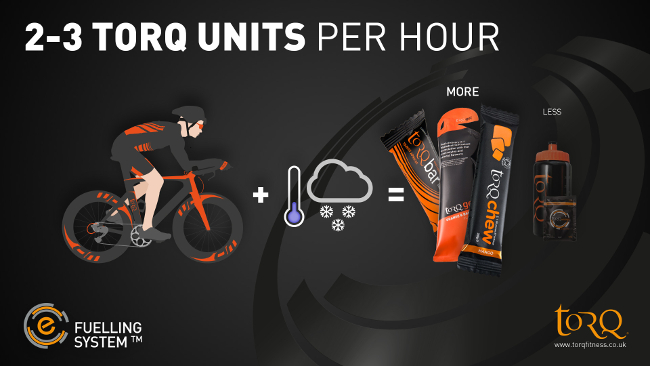 Essentially, irrespective of perspiration rates, your fueling requirements remain constant, but the more you sweat, the greater the need to replace fluid and vital electrolytes. This why the TORQ Fueling System works so beautifully, adapting to your hydration needs whilst providing the constant supply of fuel essential for optimal endurance performances. In all of the examples displayed on this page, we have used a cyclist for consistency, but whether you’re a runner, open water swimmer or triathlete, the fueling principles remain the same across endurance disciplines. 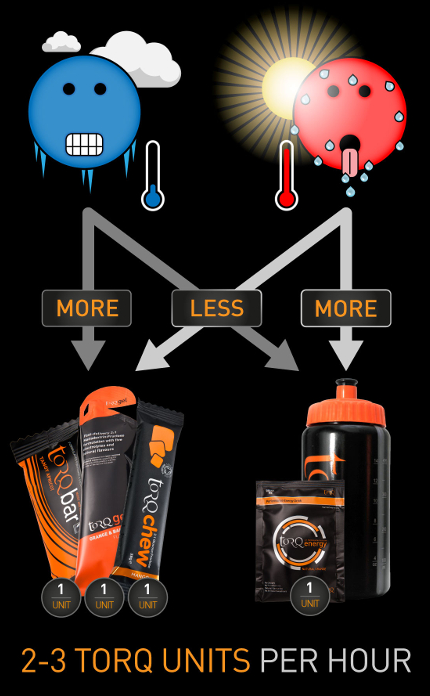 So effectively, your carbohydrate intake should always be 60-90 grams per hour, irrespective of the weather conditions and perspiration rates, but the method you chose to fuel yourself will vary. We’re recommending that newcomers and smaller individuals begin with a strategy of 2 TORQ units per hour and experiment with 3 TORQ units per hour as they feel comfortable. Individuals over 150lbs in weight and experienced sports people should be able to move onto 3 TORQ units per hour fairly easily and without any cause for concern.

The TORQ Fueling System essentially provides the tools to experiment with different fueling textures and as long as you stick to the 2-3 TORQ units per hour rule and listen to your thirst reflex, there really isn’t anything that can go wrong. From a texture perspective, the TORQ Fueling System also provides the perfect variety with fueling products ranging from ‘Wet’ to ‘Smooth’ to ‘Soft’ to ‘Chewy’ – TORQ Energy, TORQ Gel, TORQ Bar and TORQ Chew respectively. The choice of texture is all yours. 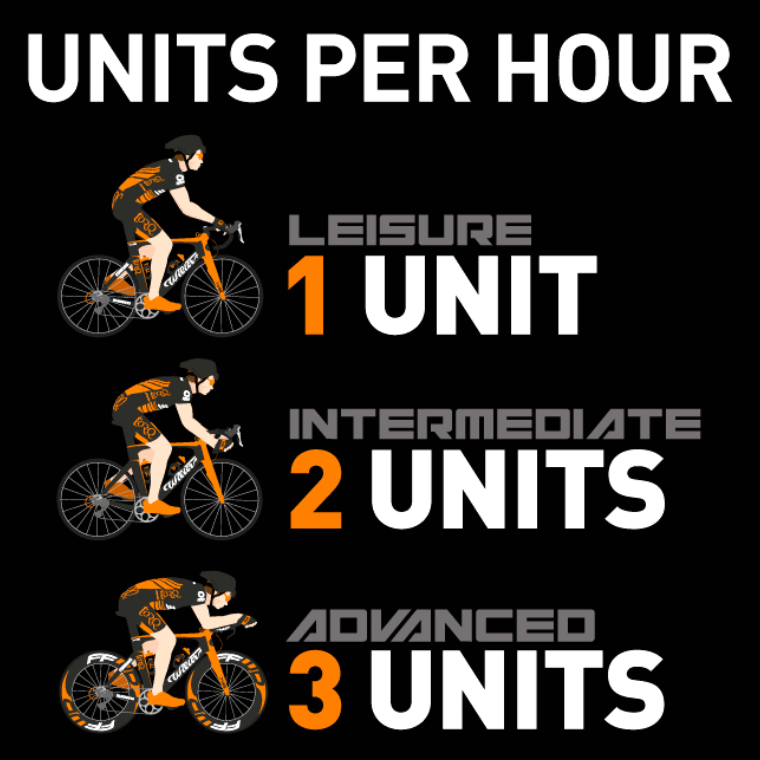 There is little point in exceeding 3 TORQ units per hour from a performance perspective, because you won’t be able to use the extra fuel anyway and over-consumption will cause undesirable gastric discomfort. 90g per hour is the human body’s absorption threshold for 2:1 Glucose-Derivatives:Fructose, so taking more carbohydrate on board than this will only cause problems.

The great benefit of TORQ’s multiple-transportable carbohydrate (2:1 Glucose-Derivatives:Fructose) matrix is that it is so rapidly digested and absorbed compared to other formulations that don’t fit this ratio. This enables the human body to handle larger quantities of carbohydrate than more traditional glucose-only formulations would allow. The science and rationale behind this 40% higher absorption rate for 2:1 formulations is explained in detail under the ‘Why 2:1?’ tab a little further on, so please take the time to read this section.

Glucose-only formulations (including maltodextrin-only recipes) have a proven absorption threshold of around 60g per hour. This means that trying to consume the 90g per hour of these formulations is simply beyond the human body’s digestive capacity and is bound to cause gastric distress. From a ‘gastric comfort’ perspective, let’s look at this another way. If you were to have a choice of consuming the equivalent of 2 TORQ Units or 60g of carbohydrate per hour through 2 different formulations, would you rather use a formulation that is at its digestion absorption threshold at 60g per hour or one that is 30g under it’s absorption capacity at 60g of carbohydrate per hour?

To summarize, the benefits of 2:1 Glucose-Derivatives:Fructose formulations are 2-fold:

1: A greater absorption ceiling at 90g per hour for better performances.

2: Taking on less than 90g per hour is exceptionally light on the stomach compared with glucose-only formulations which are much more likely to cause gastro-intestinal distress.

If you haven't, take time to visit our Science webpage, which provided a deeper dive into what we have shortly explained above. Further, our 'Why Fuel?' video below does a great job of simplifying the principals of optimal endurance fueling: